Hey there, it’s Kathleen a.k.a. ScatteredConfetti here. I was invited to design with the gorgeous Clique Kits April “Happy Everything” kit, which is also their Anniversary Kit! One year of Clique Kits already – so let’s all congratulate the girls behind Clique Kits on that!! 🙂

The two layouts I will show you today were both inspired by the one patterned paper in the kit with the many differently patterned circles on it. Immediately when I saw that paper I knew that I wanted to use it to punch out the different circles and use them on a layout (and I think many others had the exact same idea 😉 ). When I started making this first layout, I changed this plan a bit and also added in punched circles from the other patterned papers because they seemed to fit my photo and the look I was going for better.

The layout is fairly simple. I just punched some circles (with a 1.5″ punch), adhered them in a 4×4 pattern to my page and then stitched them down with my sewing machine. Then I just added some embellishments, a border on the lower edge and my photo. And that’s already it, simple as that! 🙂 To repeat the circle pattern, I also added some enamel dots in different colours and some splashes of ink.

In this second layout (size 8.5″x11″) I used some of the leftover punched out circles I had lying around from after the first LO. If you know me or my scrapbooking style, you know that my projects have lots of white space and usually white backgrounds.

When I saw this pretty pink paper with the pretty drawn leaves, I knew I wanted to use this as a background. Using the whole paper as my background however seemed too much for me. So I decided to cut it up and use it on half of my page – and I think the contrast with the crisp white other half looks great and makes the pink pop! 🙂

I chose one of the photos of my recent crafty endeavor (read: obsession): weaving! And I specifically chose this photo because the pink of the vase and the tapestry in the photo matches the background perfectly and thereby gives this layout a cohesive look. The different colours in the letter stickers also resemble the colour of the photo, as well as that turquoise little heart matches with the yarn in the photo.

The punched out circles are again complemented by some enamel dots and ink splodges and round off the whole layout! (pun not intended :D)

I hope I could give you some ideas for how to use the pretty April kit, I’ll be back in April with another post for you. In the meantime you might like to hop on over to my blog or IG to follow my crafty projects!

Thanks for having me, Clique Kits!! 🙂

I'm a 20-something year-old papercrafts enthusiast, coffee addict and Barcelona lover from Germany. I love to travel with my fiancé; our favourite destination is Barcelona. Other than that I like to scrap about the everyday details and the little things that make life wonderful!

18 thoughts on “Inspired by Circles” 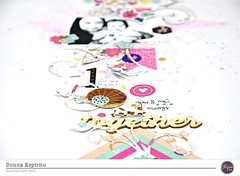